The SVM-based classification framework, which came up as a result of ITI's research activity on the knowledge-assisted multimedia analysis research field, supports the automatic image segmentation and semantic annotation at region level. Semantic annotation concerns the association of every image region with pre-defined high-level semantic concepts. 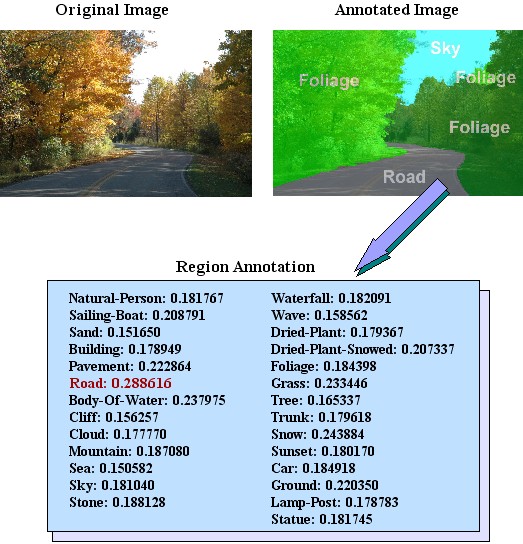 The examined image is initially segmented, using the algorithm proposed in [1], and the following MPEG-7 descriptors are extracted for every resulting region: Scalable Colour, Region Shape, Homogeneous Texture and Edge Histogram.

The core functionality of the developed framework consists of a Support Vector Machines (SVMs) structure. Specifically, an individual SVM is introduced for every defined high-level concept to detect the corresponding instances based on the calculated low-level descriptors. Each SVM is trained under the ‘one-against-all' approach.

Download an executable version of the developed classification framework.

An extension of the provided software, namely an ontology-based unified framework for realizing semantic image analysis and classification, has also been developed and is described in [2].