Within the BOEMIE project, and in collaboration with the Image, Video and Multimedia Laboratory (IVML) of NTUA, an OWL-DL ontology-based framework has been developed to support the synergistic utilization of semantics extraction from multimedia and ontology evolution in a bootstrapping process. The latter involves the continuous extraction of information from multimedia documents in order to populate and enrich the ontologies, and the deployment of these ontologies to enhance the robustness and accuracy of extraction. The developed framework covers media specific (including MPEG-7 descriptors and structural decomposition) and domain-specific (including athletic events and geographical information) aspects, as well as their conceptual linking under the so called Multimedia Semantic Model.

In the context of BOEMIE, ontologies hold a central role, serving on one hand the automatic extraction of meaningful descriptions from multimedia content, and on the other hand, allowing for enhanced presentation and retrieval of multimedia content in combination with the provided reasoning services.

With respect to semantics extraction, the BOEMIE ontology framework:

With respect to presentation and retrieval, the BOEMIE ontology framework: 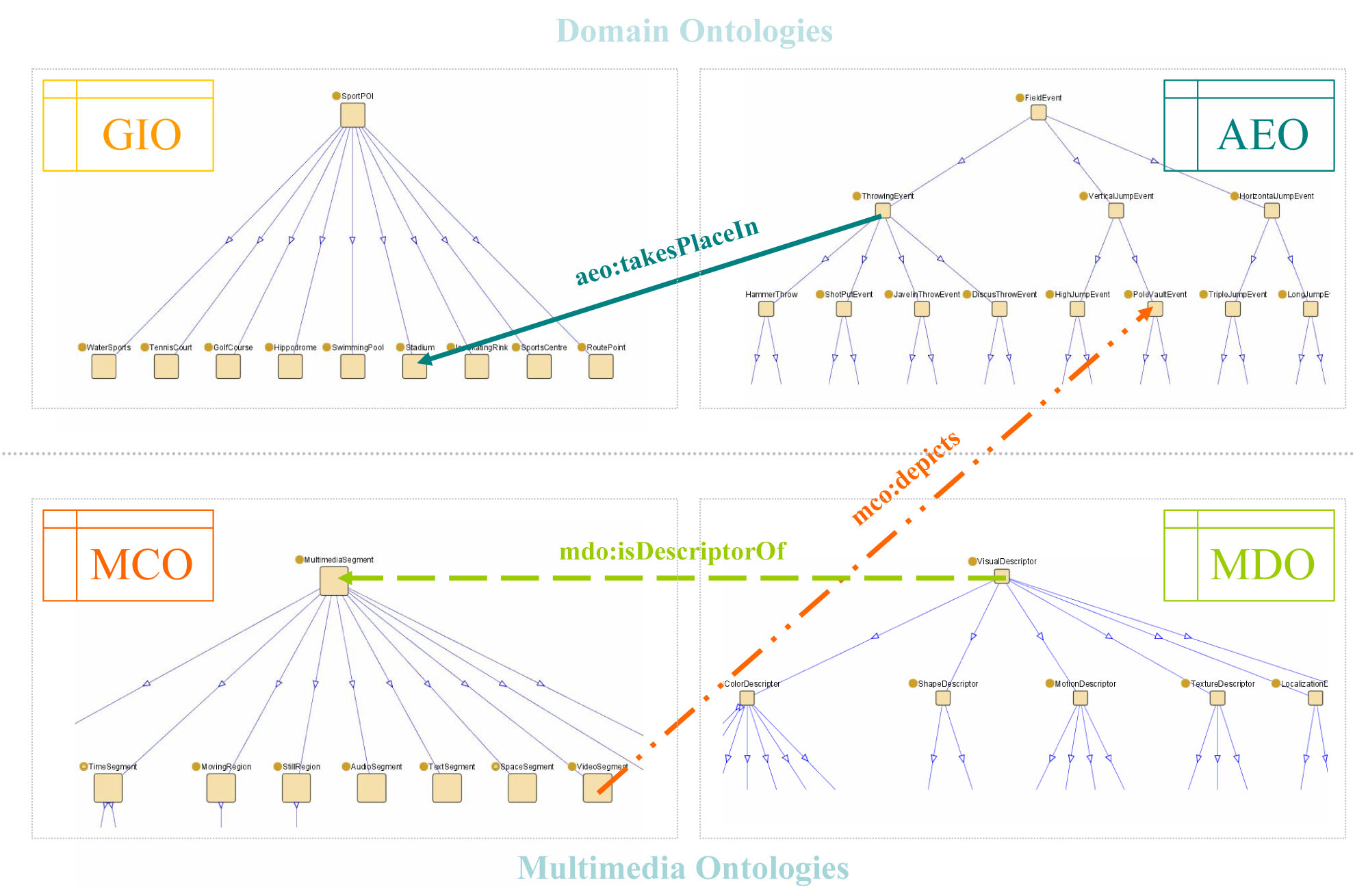 To accomplish the aforementioned, a modular engineering has been followed resulting in the development of two OWL DL domain-specific ontologies, namely the Athletic Events Ontology and the Geographic Information Ontology, and two OWL DL media-specific ones, namely the Multimedia Content Ontology and the Multimedia Descriptor Ontology. The different ontologies are linked under the Multimedia Semantic Model, which as illustrated in Fig. 1, provides the interconnections that allow the combination and management of multimedia specific information and domain-specific one to serve the former goals.

The Athletics Event Ontology (AEO) is based on the expertised descriptions provided by the IAAF Competition Rules and the IAAF Technical Regulations , while the engineering of the Geographic Information Ontology (GIO) extends the schema model of the TeleAtlas , which specializes in the delivery of digital maps for navigation and location-aware services.

Details about the engineering of the ontologies and the intermediate stages towards their finalisation, as well as related state of the art results, can be found in the corresponding deliverables at the BOEMIE official site.